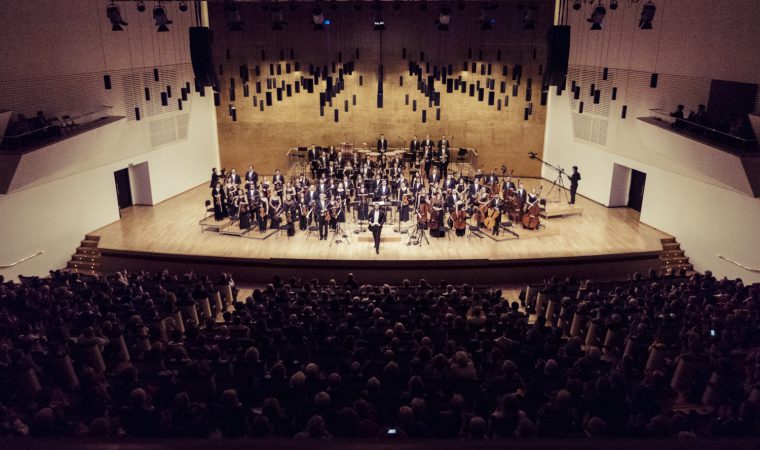 Resident orchestra of the Auditorio de Alicante, under the auspices of the Valencian regional government, it was created by its Music Director, Josep Vicent.The orchestra’s astonishing career has generated enormous national and international impact due to the quality and energy of the orchestra’s musical personality.The King and Queen of Spain have been to numerous of the orchestra’s concerts, and the King of Spain attended another concert in the month of November 2019.

“The public ovation was overwhelming and unanimous, sharing in the magnificent of interpretation that made it an unforgettable experience.” EL MUNDO

Apart from its symphonic performances, ADDA Simfònica schedules contemporary repertoire as well as historical works, while also developing an important social and educational activity. The Orchestra has participated in special concerts for the National Sport Gala, the inaugural concerts of the Volvo Ocean Race and has collaborated with the renowned group La Fura dels Baus (Carmina Burana and Haydn’s Creation).

They have recorded works by Beethoven, Prokofiev, Barber and Manuel de Falla, all renowned by public and critics alike.

In the 2019-2020 season, the orchestra will also perform in the Palau de les Arts (Valencia), the Auditori (Castellón) and Festivals in Italy and Holland.

Since 2005, he has been Artistic Director of the Jeunesses Musicales World Orchestra and he was also Principal Conductor of the Symphonic Orchestra of the Balearic Islands (OSIB) and the Xenakis Festival.

In the 2019/20 season Josep Vicent will conduct the Lille Orchestra, WDR Funkhausorchester at Amsterdam’s Concertgebouw, Orchestra Sinfonica di Milano Giuseppe Verdi, Orchestra de Valencia, and he will be in his second year as Principal Conductor of the ADDA Simfònica. Other future engagements will take him on tour with the Belgian National Orchestra and the Israel NK Orchestra.

Very dedicated to contemporary music, he has premiered hundreds of new works to great acclaim. He was Artistic Director at The Amsterdam Percussion Group (Formed by soloists of the Royal Concertgebouw Orchestra) and regularly conducts specialized groups such as the Cadaqués Orchestra Contemporary Ensemble.