The Jerusalem Symphony Orchestra, now in its 83rd season, was founded as the Palestine Broadcasting Service Orchestra in the late 1930s. In 1948 it became the national radio orchestra and was known as the “Kol Israel Orchestra”. In the 1970s, the orchestra was expanded into the Jerusalem Symphony Orchestra, Israel Broadcasting Authority. As a radio symphony orchestra, the majority of the concerts which the orchestra holds at its resident hall – the Henry Crown Auditorium – are being recorded and broadcasted over Kan Kol Ha’musika station.
The current Music Director of the JSO is Maestro Steven Sloane . The orchestra has had eight musical directors hitherto: Mendi Rodan, Lukas Foss, Gary Bertini, Lawrence Foster, David Shallon and Frédéric Chaslin.
The orchestra maintains a varied repertoire which ranges from the Baroque and the Classical periods through the Romantic period, extending to contemporary composers, many of whom have received their Israeli premières with the JSO. The orchestra was the first Israeli Orchestra to perform the works of renowned composers such as Sofia Gubaidolina, Henry Dutilleux, Alfred Schnittke and others. Since its inception the Jerusalem Symphony Orchestra has consistently encouraged Israeli composers by commissioning and performing their works.
Over the decades, some of the music world’s legendary musicians have performed with the JSO, with memorable performances by Igor Stravinsky, Otto Klemperer, Arthur Rubinstein, Yehudi Menuhin, Mstislav Rostropovich, Isaac Stern, Pablo Casals, Igor Markevitch, Henryk Szeryng, Yo Yo Ma, Pierre Boulez, Neville Mariner, Christa Ludwig, Tabea Zimmermann, Martha Argerich, Radu Lupu, José Carreras, Jean Pierre Rampal, Maxim Vengerov and Yefim Bronfman.
Among the most notable premières performed by the orchestra: the opera David by Milhaud (1954); the cantata Abraham and Isaac by Stravinsky, conducted by Robert Craft (1964); and The Seven Gates of Jerusalem by Krzysztof Penderecki conducted by Maestro Lorin Maazel, which was commissioned as the conclusion for the Jerusalem 3000 celebrations (1999). 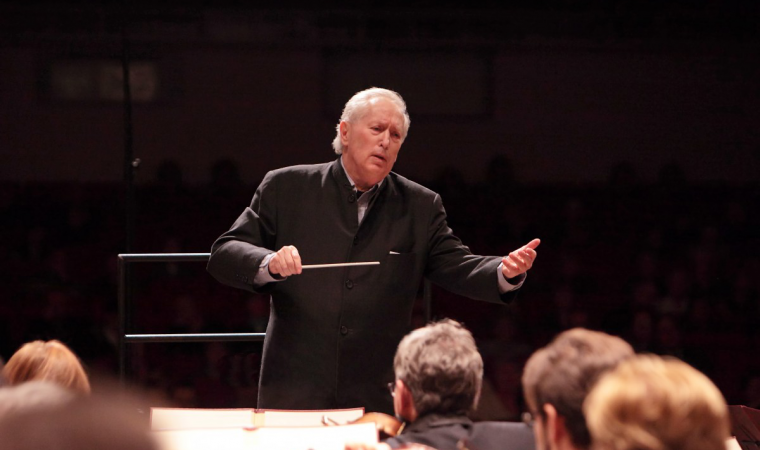 Thomas Sanderling is a German conductor. Living in exile with his famous father, conductor Kurt Sanderling, Thomas Sanderling was born in the Soviet Union and began his education by studying violin at the special school of the Leningrad Conservatory. In 1960 he began his studies at the Hochschule für Musik “Hanns Eisler” in Berlin. In 1962, after winning a national conducting competition, he made his debut as a conductor, followed by further studies with Hans Swarowsky. He was assistant to Herbert vonKarajan and Leonard Bernstein. Thomas Sanderling started his career in Sondershausen and Reichenbach, before being appointed music director in Halle/Saale in 1966, where he began to discover and work on a wide range of repertoire in both concert and opera. In 1978 he made his debut at the Wiener Staatsoper and later at the Bayerische Staatsoper, which was followed by his appointment to the position of permanent guest conductor at the Deutsche Staatsoper Berlin. He eventually moved to the Federal Republic of Germany in 1983. Between 1984 and 1986 he was principal conductor and artistic advisor of Amsterdam’s Philharmonisch Orkest.
During his career he conducted all important orchestras as well as at many international opera houses, including Teatro La Fenice Venice, the Bolshoi Theater Moscow, the Mariinski Theater St. Petersburg, L’Opéra de Nice, the Deutsche Oper Berlin, the Komische Oper Berlin and the Hamburgische Staatsoper. International singers and instrumental soloists with whom he has worked include David Oistrach, Emil Gilels, Gidon Kremer, José van Dam, Ferruccio Furlanetto, Gundula Janowitz, Robert Holl, Rudolf Buchbinder,Natalia Gutman, Sergei Leiferkus, Paul Tortelier, Andrej Hoteev and Walter Berry. He is a regular guest conductor of the Radio Symphony Orchestras in Germany, Principal Guest Conductor of the Philharmonic Orchestra Novosibirsk as well as the National Philharmonic Orchestra of Russia. The Osaka Symphony Orchestra, with which Sanderling twice won the local critics’ prize, appointed him “Music Director Laureate for his Lifetime”.
Thomas Sanderling is one of the most important conductors of Russian repertoire nowadays. He is an important musical ambassador in this field. There existed a special friendship between Thomas Sanderling, the composer Dmitri Shostakovich and his family. Having attended Sanderling’s Moscow debut, Shostakovitch asked the young musician to conduct the German first performance of his symphonies No. 13 and 14. On the request of the composer Sanderling also made the first German translation of both symphonies’ texts. After this he conducted the premiere CD recording of Shostakovich’s “Michelangelo Suite”. Sanderling’s premiere CD recordings of Shostakovitch’s Song Cycles for Orchestra on Deutsche Grammophon was selected as “The Editor’s Choice” by the renowned UK music magazine The Gramophone. Several world premieres of Sanderling’s original text versions of song cycles by Dmitri Shostakovich followed, both in concert and as premiere live recordings in Munich with the Symphonieorchester des Bayerischen Rundfunks. In May 2013 Sanderling conducted the world premiere of the last opera by Russian composer Mieczysław Weinberg, The Idiot after the novel by Dostoyevsky, at Nationaltheater Mannheim. In October 2013 there were other Shostakovich premieres with the Helsinki Philharmonic Orchestra and baritone Gerald Finley.
He was appointed as the music director of Novosibirsk Philharmonic Orchestra in 2017.

Charlie Siem is one of today’s foremost young violinists, with such a wide-ranging diversity of cross-cultural appeal as to have played a large part in defining what it means to be a true artist of the 21st century.
Born in London to a Norwegian father and British mother, Siem began to play the violin at the age of three after hearing a broadcast of Yehudi Menuhin playing Beethoven’s Violin Concerto. He received a broad and thorough education at Eton College, before completing the intellectually demanding undergraduate degree programme in Music at the University of Cambridge. From 1998 to 2004 he studied the violin with Itzhak Rashkovsky in London at the Royal College of Music, and from 2004 he has been mentored by Shlomo Mintz.
Siem has appeared with many of the world’s finest orchestras and chamber ensembles, including the Bergen Philharmonic, Camerata Salzburg, Czech National Symphony, Israel Philharmonic, London Symphony, Moscow Philharmonic, Oslo Philharmonic, Rotterdam Philharmonic, and the Royal Philharmonic Orchestra. He has worked with top conductors such as Charles Dutoit, Edward Gardner, Zubin Mehta, Yannick Nézet-Séguin, Sir Roger Norrington, Libor Pešek and Yuri Simonov. International festival appearances to date include Spoleto, St. Moritz, Gstaad, Bergen, Tine@Munch, Festival Internacional de Santa Lucía, and the Windsor Festival. Siem’s regular sonata partner is renowned pianist Itamar Golan.
Highlights of the previous seasons included concerto debuts in Mexico, Munich, and Milan; recitals in Norway with Itamar Golan; a debut with the Royal Philharmonic Orchestra and Maestro Charles Dutoit; and an eight-concert debut recital tour of Australia, culminating with a performance at the Sydney Opera House. Charlie Siem enjoys a strong presence in China, where during the 2016/2017 season he was named Cultural Ambassador of Nanjing, and gave fifteen concerts at major venues across the country (including Beijing, Harbin, Nanjing, Shanghai, Xiamen, and Xuzhou), a tour of the Bruch concerto with the Israel Philharmonic an Maestro Zubin Mehta ; Siem’s USA concerto debut ( Sibelius Concerto with Jacksonville Symphony and Music Director Courtney Lewis) ; a tour with the Czech National Symphony Orchestra; and a South American recital tour with Itamar Golan.
Charlie Siem has a varied discography and has made a number of recordings, including with the London Symphony Orchestra (Warner Classics, 2011) and Münchner Rundfunkorchester (Sony Classical, 2014).
A great believer in giving to worthwhile causes, Siem is an ambassador of The Prince’s Trust. He is also a Visiting Professor at Leeds College of Music in the UK and Nanjing University of the Arts in China. He gives masterclasses around the world at top institutions such as the Royal College of Music in London, and the Accademia di Musica in Florence.
Passionate about bringing classical music to new audiences around the world, in addition to his classical performance career Siem has revived the age-old violinistic tradition of composing virtuosic variations of popular themes, which he has done alongside artists including Bryan Adams, Jamie Cullum and The Who In 2014, he wrote his first composition – Canopy, for solo violin and string orchestra – which was commissioned by USA television station CBS Watch!, and recorded with the English Chamber Orchestra. Siem has also had numerous collaborations with fashion brands including Armani, Chanel, Dior, Dunhill, and Hugo Boss.