In 2022, coinciding with the 50th anniversary of diplomatic relations between China and Britain, the Shenzhen Symphony Orchestra will tour in UK in April for six performances in London, Birmingham, Nottingham, Edinburgh, and elsewhere, the first time in the history of overseas performances by Chinese orchestras on the regular series in the best concert halls in six major cities in the UK, as part of the concert halls’ season planning and promotion.

We are also actively promoting the cooperation plan between Nine Trees Shanghai Future Art Centre and the Royal Philharmonic Orchestra for educational activities, symphonic concerts and chamber music concerts in a 3-year agreement.

In 2022, which also coincides with the 30th anniversary of diplomatic relations between China and Israel, we will work with the Embassy of Israel in China, the Ministry of Culture and Tourism, the China National Symphony Orchestra and the Israel Philharmonic to plan a concert between the National Symphony Orchestra and the Israel Philharmonic, and to plan the creation of the Mischa Maisky Festival in China.

The dance music theater “Yuanyuan Tan and Her Friends – Magical Night at the Art Museum 2” will be produced and toured.

We will also venture into the exhibition field for the first time, planning and running the largest exhibition in the 25 years of illustrator Jimmy Liao’s career, whose works have won awards in many countries and regions and have been translated and published in over 20 different languages.

In 2022, we hope to have the opportunity to bring long-time friends, musicians and ensembles we haven’t seen for a long time, and new ones, the Russian National Orchestra with Mikhail Pletnev, the Israel Philharmonic with its new Music Director Lahav Shani, Sinfonia Varsovia, the Hungarian National Philharmonic, the Cologne New Philharmonic with Volker Hartung and Barry Douglas performing a new concerto by our composer client Andrew Webb-Mitchell, the Zukerman Trio, cellist Sheku-Kanneh Mason, and many more.

Standing at the end of the year 2021 and looking back at a busy time, we warmly look forward to an even busier 2022, with many international guests joining us here in China and many Chinese artists and project travelling internationally! 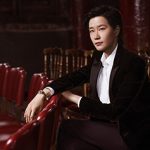